How can you make the most out of Spain’s coolest city on a budget?

This may sound more expensive than a hostel, but if you’re going with a group of friends it’s worth looking into renting a holiday apartment and splitting the cost between you. Not only is it more exciting – a house of friends can only mean fun and laughter (and minimal sleep) – but you’ll save money on food too. 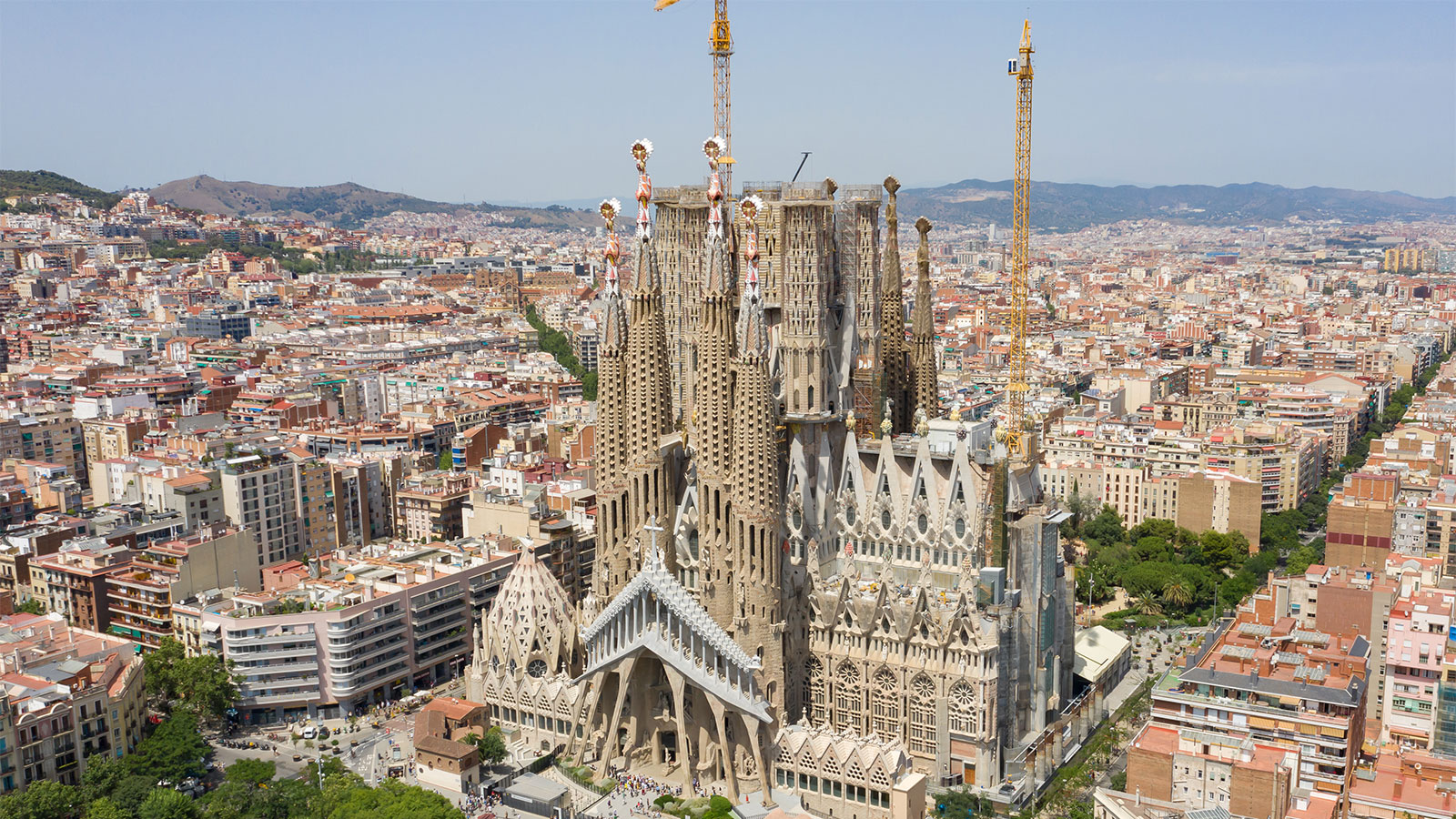 La Sagrada Familia designed by Antoni Gaudi. This unique and unusual construction is Barcelona’s most famous tourist attraction and the most visited, so it’s a must-see attraction. It is also rated as one of the world’s top attractions by Tripadvisor users. It is free to see the Sagrada Familia church from the outside. La Sagrada Familia welcomes 3 million visitors a year, which means long queues all day of 1 hour or more to get inside the church. It is however, worth seeing inside so a good tip is to buy advance skip-the-line tickets. How long does it take to visit Sagrada Familia? From the outside about 15 minutes to walk all around. To see the Sagrada Familia church inside you should plan to spend at least 1 to 2 hours to see it all and maybe go up inside some of the towers. Your ticket to the Sagrada Família is actually a donation to help finish the construction which is privately funded. The temple was designed by famous Catalan architecht Antoni Gaudi over 100 years ago – the foundation stone was laid in 1882, when the surrounding area was mostly fields. The splendid Sagrada Familia interior was note fully opened to the public until 2012. The outside is still being built and was at around 70% completion in 2015. Only 8 towers of the 18 spires are finished. The ambition is to complete the Sagrada familia church in 2026 to celebrate the 100th anniversary of Gaudi’s death in 1926. When it is finished it will be 144 years since construction began. See a YouTube video of how the finished Sagrada Familia will look.  Gaudi himself knew that it would take a long time to finish the temple and he famously once said, “My client is not in a hurry.”  Gaudi died quite tragically in 1926 after being hit by a tram. When he died only the nativity facade was built. Visit the Sagrada familia on a hop-on-hop-off bus tour or take the metro to station Sagrada Familia. Beat the 1 hour long queues to see inside by buying skip-the-line tickets. The Font Mágica Fountain. The Magic Fountain is a “must see” Barcelona attraction. You have never seen a fountain like this. It really does feel magic to experience the beautiful show of water, light and music. The Magic fountain was built in 1929 as one of the main attractions for the Barcelona World Fair and the Font Magica is still one of the most famous spots in Barcelona with an estimated 2.5 million visitors annually. There are evening water and light shows in the winter on Friday and Saturdays only. In the summer the evening light and music show is open from Thursday to Sunday. Admission is free all year. See show times below. Please note that sometimes due to exhibitions and events access to the fountain can be closed. Visit the Magic Fountain by metro to station Espanya. 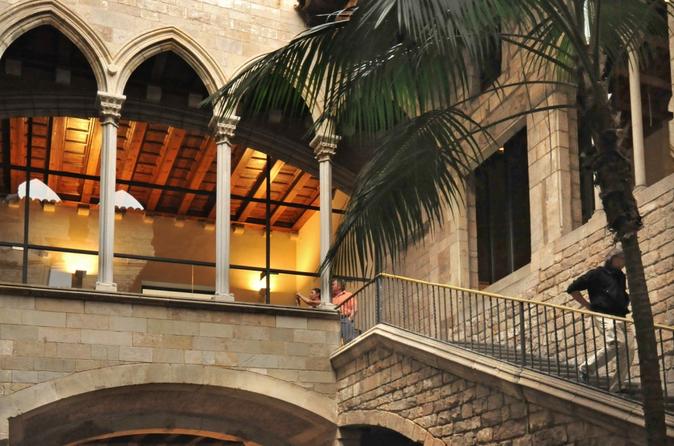 Picasso Musuem. The world’s most famous painter Pablo Picasso was born in Malaga in the south of Spain, but lived in his youth in Barcelona with his family from 1895 to 1904. It was here he spent his formative years as an artist and first exhibited. The Picasso Museum is in the Born area of Barcelona and is Barcelona’s most famous museum and a top 10 attraction. Picasso’s father was an art teacher. The young Pablo Picasso had already started art studies in Malaga, but Barcelona was a major influence on his early years as a struggling painter. Picasso first exhibited his work in Barcelona and considered himself from Barcelona. The Picasso museum in Barcelona does not have the most famous Picasso paintings, but the collection in Barcelona is unique and has 4000 works. You find early sketches and lesser known Picasso’s, which explain and show his development as an artist. The museum is located in various magnificent gothic mansions in the medieval part of Barcelona called El Born. Visitor Tip 1: Book a Picasso walking tour which includes skip-the-line access and guided tour of the museum. Visitor Tip 2: If you just want tickets, the queues are very long so buy skip-the-line Picasso museum tickets   Visitor Tip 3: The Picasso museum has free admission for everyone on the first Sunday of each month all day and is free every Sunday after 3pm. Get to the Picasso Musuem by metro to station Jaume I and then 10 walk.

La Rambla is another must-see. Also called Las Ramblas The Spanish poet Federico García Lorca said about La Rambla, “It is the only street in the world which I wish would never end.” La Rambla starts at Plaza Catalunya and ends at the Monument of Columbus at the Port Vell harbour of Barcelona. La Rambla it is not a spectacular sight, but very pleasant to stroll down and enjoy the human heartbeat of Barcelona. If you have not strolled down it, you cannot say you have been in Barcelona. Also called Las Ramblas as it is really a collection of various stretches of street with different names. During the day and early evening completely safe and free to visit. However, be careful of pickpockets on La Rambla and in the Metro stations nearby. In the early hours of the morning 2 – 4am be wary on lower part of La Rambla near the harbour. This attraction is always open and free. Keep a hand on your bag at all times and wear your backpack on your front to avoid pickpockets.

Camp Nou Stadium home of Barcelona football team. Buy Tickets Barcelona games. If there are no games during your visit, then book the stadium and museum tour. The Camp Nou stadium and FCB museum are among the most popular attractions in Barcelona attracting millions of visitors a year. Camp Nou also has the one of the largest Nike stores in Europe packed with Barca merchandise. Unmissable for Barça fans. Visitor tip. You can buy cheaper FCB shirts and scarves from market stalls outside stadium on match days but they might not be official. 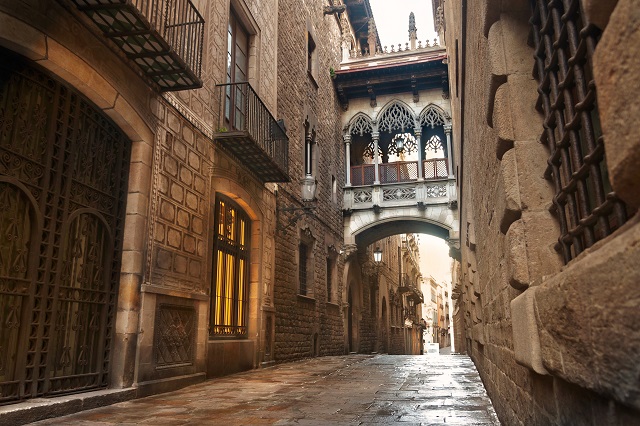 The Barrio Gotico gothic quarter is the medieval city of Barcelona from the middle ages. It grew around the old Roman town of Barcino which is the oldest part of Barcelona. The gothic part of the city has many beautiful churches, plazas, markets and museums and you can see parts of the old Roman walls. If you visit the Barcelona history musuem – Museu d’Història de la Ciutat – you can see remains of Roman houses and streets of Barcino in Roman times under the museum. The gothic quarter is free to visit and best seen on foot because tour buses cannot get through the narrow streets. There are no dangerous areas in the Gothic quarter, but be aware of Barcelona pickpockets. Also worth visiting is the neighbouring medieval area of Barcelona’s old city called El Born. Parc Guell by Antoni Gaudi. Parc Guelli is a UNESCO World Heritage Site and is considered to one of Gaudi’s most artistic works. Parc Guell is a Barcelona top attraction and definite must see. The park is on Carmel hill so seeing this attraction means quite a long and uphill walk if you take the hop-on-hop-off bus or metro station Vallcarca. If you prefer not to walk, then take a taxi to the Park Guell front gate. The original idea of Park Guell was to build a private and exclusive residential garden village with 60 houses. This business idea of Guell’s didn’t work and after his death in 1923 the park was donated by his family to Barcelona´s city as a public park.

Modernist buildings Barcelona. Modernisme was a Catalan cultural movement centred in Barcelona and Catalonia from 1888 to 1911. It is most famous for its architectural expression in particular the many works of Antoni Gaudí. There are a handful of modernist buildings in Barcelona that are outstanding. Three of them are in the one Barcelona city block called the “Illa de la Discòrdia” – the “Block of Discord” on the street Passeig de Gracia. They are “Casa Amatller” designed by Josep Puig i Cadafalch, the magical “Casa Batlló” by Antoni Gaudi and the “Casa Lleó-Morera.” A little further up the street Passeig de Gracia on the opposite site is one of Gaudi’s most famous buildings in Barcelona named “Casa Mila” – and nicknamed “La Pedrera” (the Quarry). which is pictured above. In the summer months you can enjoy rooftop terrace jazz concerta at La Pedrera. At Casa Batllo you can tour the builiding and also enjoy summer concerts in the modernist courtyard. Another modernist treasure is the beautiful Palau Guell town house near Las Ramblas, also by Antoni Gaudi. For modernist art and furniture visit to the Barcelona Modernist museum. A popular way to see top modernist buildings is on foot on Passeig de Gracia or by taking hop-on-hop-off tourist buses. Nearst Metro stations Passeig de Gracia or Diagonal 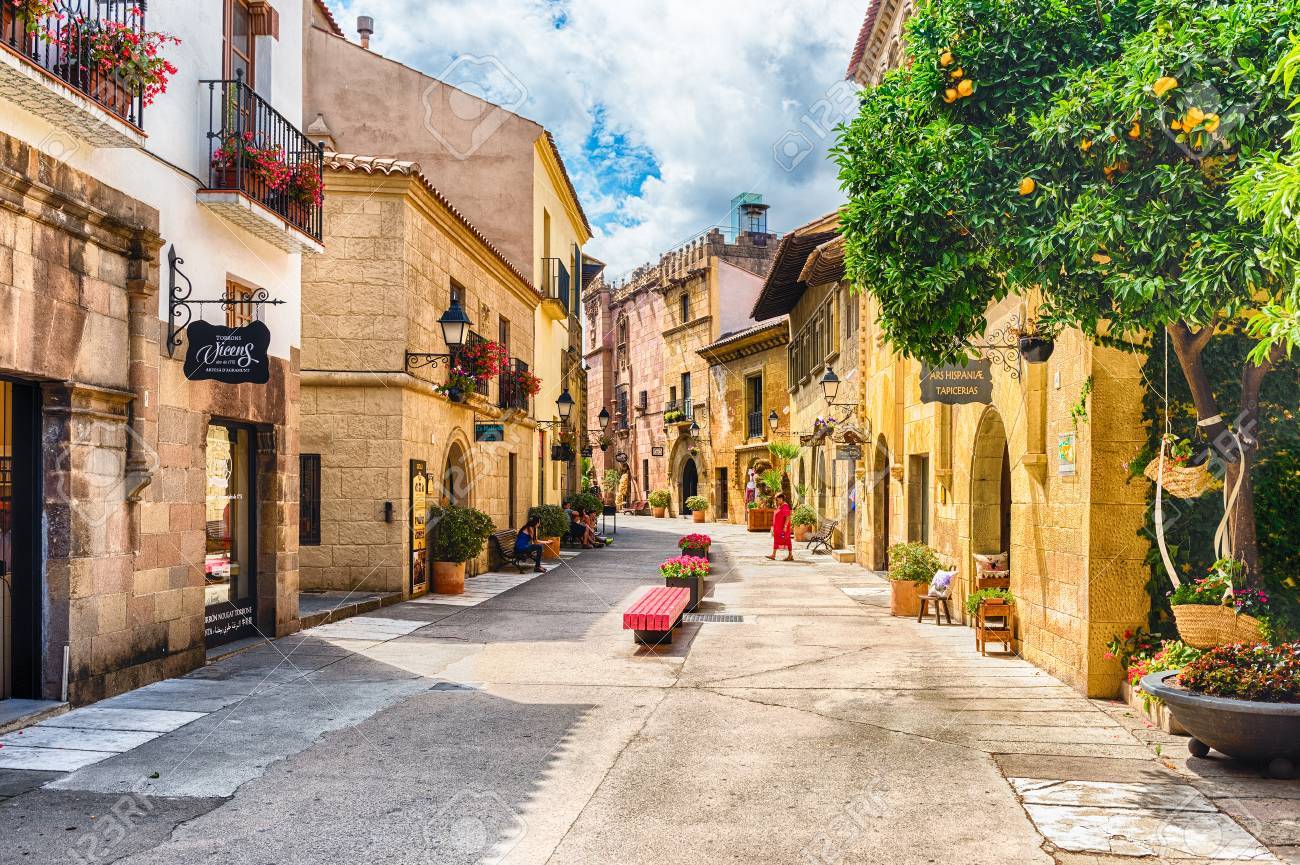 Montjuic hill and Poble Espanyol de Barcelona – the Spanish Village of Barcelona. Montjuic hill has many parks and attractions including an old fort at the very top called Montjuic Castle, which has a rich and dark history and fantastic views of Barcelona. The other big attraction on Montjuic hill is a unique Spanish village called Poble Espanyol which was built in 1929 for the Barcelona 1929 World Fair and Universal Exposition. The Poble Espanyol village is the 4th most visited attraction in Barcelona. It was built in 1929 as an architectural experiment to create a village to showcase Spain’s different architectural styles. It was so popular that it was left intact after the world exhibition and it now houses a wide variety of cafés, summer open air night clubs, restaurants, over 40 very nice handicraft shops and a full programme of concerts and events, especially in the summer. You can also see a very good flamenco show called El Tablao de Carmen at Poble Espanyol, which includes 1 hours free entrance to Poble Espanyol. Poble Espanyol was designed by Catalan architect Josep Puig i Cadafalch. This attraction is on hop-on-hop-off bus routes or take metro to nearest metro station Espanya and then it is 20 minute walk. 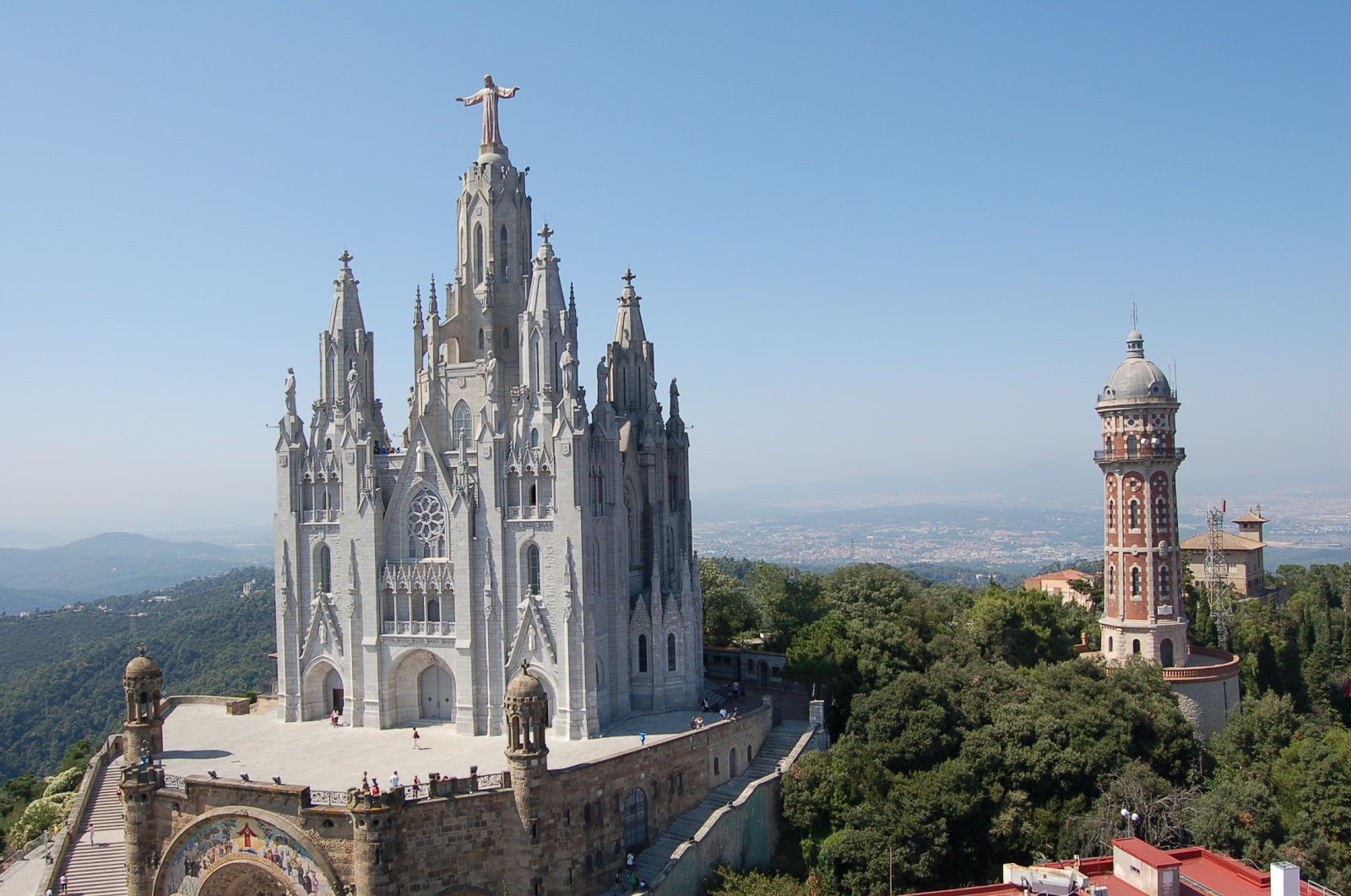 A visit to Tibadabo is a fun thing to do in Barcelona and great for kids. The views of Barcelona are fantastic and there is a small and fun vintage amusement park at the top, which is open in the summer from March to September. You can reach the top of Tibadabo via a vintage Blue Tram which connects to a mountain railway, Or take the bus from the Plaza Catalunya directly to Tibidabo. The fun-fair is closed in winter, open at weekends in spring and autumn and generally open from Wednesday to Sunday in summer, but check before visiting. The Skywalk where you can enjoy views of Barcelona is free and open all year except a few weeks in February for annual maintenance. The Sagrat Cor church at the top of Tibidabo is open all day and is free to visit. Visit by bus or by tram/mountain train.

Feeling inspired? Then get yourself to Barcelona quick sticks! We can sort out your accommodation, flights and tour itineraries.